Well, I had a nice Fathers Day on Sunday with my Dad (who is visiting from Kansas) and my brother Don. It is great when we can all get together. For dessert I made up some cinnamon magic shell and dipped some ice cream cones. This is basically the same recipe as the Butterscotch Dipped  Ice Cream that I posted last year – I just substituted cinnamon chips instead of using butterscotch.chips.

This is such an easy recipe that there’s not much reason to write it down , but every reason to make up a batch! It will be the hit of your next ice cream party!! Experiment and come up with your own favorite topping 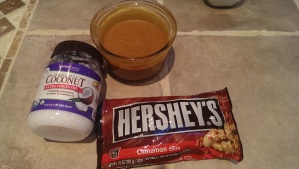 Pour one bag of Hershey’s Cinnamon Chips and 4 Tablespoons of extra virgin coconut oil into a microwave safe bowl. Microwave for 30 seconds on full power, then stir. If chips aren’t completely melted then microwave another 15-30 seconds. That’s it!

Simply dip your ice cream cone into mixture or drizzle on top of ice cream if its in a bowl. Top with chopped pecans or other nuts if you wish. (Just be quick about it… the magic shell will harden in less than a minute!!)

The Herb Society of America Blog

Up to the Hills

Exploring the world, one step at a time

Yes I am going there

Our small family living in a 5th wheel following Dads work as a rock fall technician... what could go wrong?

Fresh ingredients and great ideas for your table.

Breaking Open the Nutshell
Beyond all Measure
Ticket To Explore

A mind that is stretched by a new experience can never go back to its old dimensions. -OWHJ

Meg and Zach: Out The Door

The world is big

By a windswept wanderer

Where I write about trying to balance homesteading, homeschooling and this crazy thing we call life!

Bringing the outdoors to you!

a collection of my cooking & kitchen adventures